Panoramic 360 degree imaging started in 1787 when English painter Robert Barker coined the term “panorama” for his paintings shown on a cylindrical surface. The name panorama derives from the Greek words pan (’all’) and horama (’view’) and truly stood for what Barker showed in his purpose-built panorama building on Leicester Square, London.

Upon entering the building, visitors found themselves on a central platform surrounded by a continuous painting depicting views such as the city of London in the midst of the industrial revolution. For the first time the limits of the conventional scale of pictorial representation were expanded, showing 360 degree images to a broad audience and allowing them to feel as if they were actually standing on Carlton Hill overlooking Edinburgh’s landscape. Robert Barker made a fortune out of this invention and casually opened the doors to the wonderful world of panorama imaging. 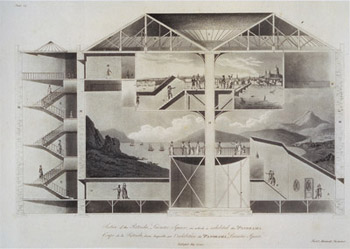 From: Bernard Comment: Das Panorama - Robert Mitchell: profile of the Rotonde at Leicester Square, London. Mitchell was the architect of the first rotonde inaugurated in 1793 with a 360 degree view on Robert Barkers panoramas.

Not long after in 1826, Frenchman Joseph Nicéphore Nièpce invented photography. Factual and documentary painting, including landscape art and panoramas, thus hit a crisis. As exciting as it was to indulge in large scale paintings of the battle of Waterloo, it became boring when photography hit the market and displayed scenes much more realistically. However photography, just like painting before the panorama, was restricted to a certain scale in the beginning. The invention of the first panoramic photo camera didn’t take long. Joseph Puchberger from Austria invented the first hand crank driven swing lens panoramic camera in 1843.

From: Bernard Comment: Das Panorama - Michael Zeno Diemer: the battle of Berg-Isel. This huge panorama measures 10x100 metres and was completed in only 3 months by Diemer and his team. It was first exhibited in 1896.

But Herr Puchberger’s camera only recorded a150 degree field of view instead of a full 360 degree view. Hence in 1857 M. Garrela of England patented a camera that rotated around its own axis and did the job. This was the first camera that could capture a full 360 degree view by using fan governed clockwork mechanics. Following the invention of flexible film (instead of heavy glass plates) in 1888, many panoramic cameras in Europe and the United States were invented and made panoramic photography known and loved by a broad audience. The most popular camera used by professionals at that time was the Cirkut camera, developed in 1904 by the Rochester Panoramic Camera Co. factory. However Kodak was buying the company a few years later and further developed the Cirkut for a few more decades, there were still private gentleman producing their own panoramic gear. Among these were Herr Frederick W. Mueller of Baltimore who patented the 360 degree Cyclorama camera, which was used before World War 1 for the first aerial photos taken by a U.S. navy plane. Another pioneer in panoramic photography was George Lawrence from Chicago: he built his own panoramic cameras since 1902 and was an incredibly talented craftsman. The photographs he took of the 1906 San Francisco earth quake “San Francisco in Ruins” became legendary and show an immensely high quality. 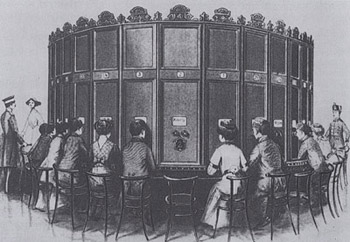 From: Bernard Comment: Das Panorama - The Kaiserpanorama from 1883. Situated in Berlin, this attraction featured a moving carousel where the spectators looked at several panoramas of foreign cities through peepholes. Inventor August Fuhrmann comissioned photographers and painters from around the world and established a collection of about 125,000 panoramas.

Be that as it may, the cameras used in these days still weighed a tonne and were difficult to operate. Snapshooting with panoramic cameras was neither possible nor affordable. The purpose of these heavy beasts was to photograph landscapes in high resolution, most commonly for documentary, military and scientific purposes.

So when did 360 panorama photography become easier to handle? Smaller cameras were introduced when 35mm film became the standard for amateur photography in the 1950s. The first 360 degree camera that used 35mm film was the Japanese Panorax Zi-A from 1958. However, since the demand for high resolution images was better met by larger format films and the cost was secondary in the professional sector, this camera was the only 360 degree machine working with 35mm film until the early 1980s. Back in these days professionals in China were provided with the Sea Gull RL-360 from 1969 which used 8” black and white roll film, Americans captured their landscapes on 70mm film with the battery powered Cyclo-Pan 70 from California and the Hulcherama, a 360 degree camera that worked with 120 or 220 roll film and was released in 1979. 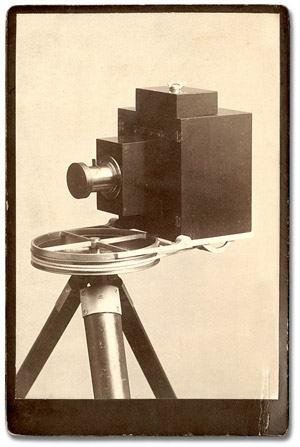 Via archives.gov.on.ca - John Connon’s whole circuit panoramic camera was the first camera to record 360 degrees of the horizon on a long roll of film. Patented in Britain and the United States in 1887, and in Canada in 1888.

The 1980s were finally the kickoff to more 360 degree panoramic cameras hitting the market. Panoramic cameras were developed that sported high-end optics, electrically powered drives and fully manual controls. Among these were the wonderful Globuscope 360 degree 35mm slit camera that worked with a spring drive motor mechanism, the electronically powered Alpa Roto 70, the Panoscope from 1985 and the Roundshot from 1988. As it happens all of these three cameras were invented in tiny Switzerland.

These cameras produced fantastic results but were still limited to the professional sector due to their price. You couldn’t get any true 360 degree panoramic camera under 1000 US dollars. 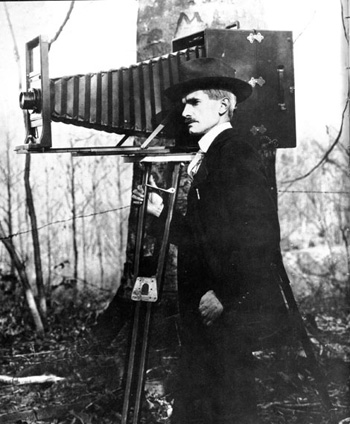 Via memory.loc.gov - A panoramic photographer with his very handy Cirkut camera. Around 1910.

Now, this is all history and a whole new era of 360 degree photography is about to start. Inspired by a futuristic camera concept from the 1980s the Lomography Spinner 360° combines snapshooting and panoramic photography. Until now 360 degree panoramic photography required patience, a sturdy tripod and serious investment. With the Lomography Spinner 360°, the world in its full 360 degree beauty is finally available to anyone and is more creative, exciting and experimental than ever! 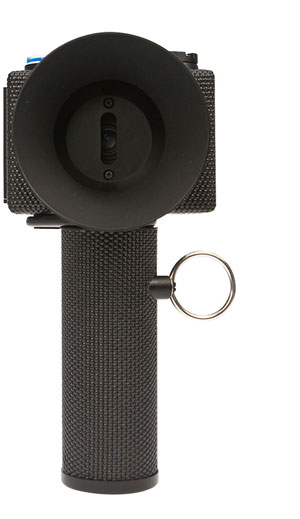 Go beyond the confines of standard panoramic landscapes and capture everything around you in one 360° photo with the standard black edition of Lomography Spinner 360° 35mm camera!