Born From the Ashes

To put things in perspective, let’s first take a look at the time frame. The Soviet Union stood victorious in the aftermath of World War II and laid claim to Eastern Germany. With this new territory came a crucial resource for their burgeoning nation – the knowledge and tools of the world-famous German optical & photographic industry. Whole factories were dismantled and shipped East – destined to supply the Soviets with world-class means of documenting their daily lives and great loves.

One beneficiary of this new technology was “GOMZ” – which elegantly stands for "Gosularstvennyi Optiko-Mekhanicheskii Zavod" (State Optical-Mechanical Factory). Established in St. Petersburg (Leningrad) in 1932, this was one of the oldest Russian optical companies. In 1965, they changed their name to something a bit more familiar to folks like us - Leningradskoe Optiko Mekhanichesko Obedinenie (Leningrad Optical-Mechanical Union) – or simply, "LOMO."

About one year after the war’s end, GOMZ introduced a brand new camera. Dedicated to and named after the Soviet Union’s Communist Youth Organization, this small twin-lens medium format camera was called the "Komsomolets." On the surface, it was an obvious copy of the Voightlander Brilliant – a ground-breaking TLR camera that was created nearly 10 years prior. It featured a glass lens and a lightweight Bakelite (an early form of plastic) body. Despite the Komsomolet’s simplicity and clear “homage” design, it was a pretty incredible achievement for a country that just emerged from a huge and damaging war.

After several years of producing Komsomolets, the GOMZ factory proudly introduced a new camera with a radically important feature – coupled lenses. This meant that focusing the viewing lens focused the taking lens in kind, allowing the photographer to hone in precisely on their subject. This camera was given the name “Lubitel” – which roughly translates into “Amateur” in Russian. From these humble beginnings, a grand lineage was born.

Over the next few paragraphs, we’ll take you through each individual Lubitel model and details their many charms and features – so we don’t have to get into the specifics right now. But chew on this for a second – from the Lubitel’s original conception in 1949 to the end of its production in the early 90’s, something between 4 and 5 MILLION cameras were produced. That’s somewhere between 8 and 10 MILLION little Russian lenses mounted low and high. Given these staggering numbers, it’s easy to appreciate the impact that the Lubitel had on its fans and owners – both inside and outside of the Soviet Union. Allow us to take you through it’s grand “family tree” – beginning with a few individuals that predated those fateful days following WWII.

Appropriately named after the Communist Youth organization "Komsomol," this camera is one of the very first products created by the burgeoning Soviet photo industry. It is also the very FIRST TLR camera created in the Soviet Union. Overall, it’s pretty much an exact copy of the original non-​focusing Voigtländer Brilliant, albeit with a few simplifications to the body design. It’s produced in Bakelite – a predecessor to modern-day plastics. Although the focusing Voigtländer Brilliant was released eight years earlier, the Komsomolets was modeled after the first Brilliant, so the taking and viewing lenses are not connected.

As with the Brilliant, the Komsomolets has a small internal compartment for storing filters and supplementary lenses.

The successor to the Komsomolets has one major innovation – as inspired by the 1938 Voightlander Brilliant – a coupled gearing to connect the taking and viewing lenses, allowing each to be focused in sync. Its shutter had a larger range of speeds, and its shooting and taking lens both opened up to a nice 'n' bright f/2.8 with a wider angle of view.

The name 'Lubitel' roughly translates to 'Amateur' – the type of person who would have been a seriously lucky goose to have one of these appear under the Christmas tree. Like the Komsomolets, it was produced in Bakelite. And just for kicks – a Chinese copy of this original Lubitel emerged in 1961 under the mysteriously hilarious name, 'Changle.' 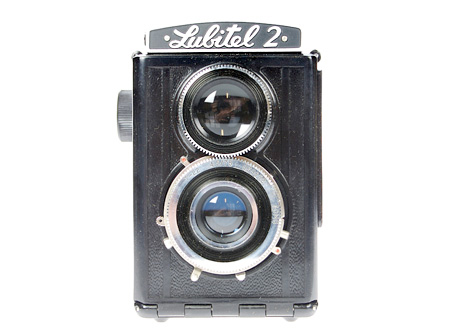 Another Bakelite beauty, the Lubitel 2 is pretty much identical to the original Lubitel, but with a few small changes. A gentleman by the name of G. Barkovski, is credited with the creation of this 'upgrade.' Most notably, the camera now featured a self-timer and flash snyc. It also has a small housing on the side for two lens filters.

As you can see from its production dates, the scope of its manufacture is HUGE. We’re talking over two and a half decades of Lubitel 2’s! An interesting note is the Bakelite texture from camera to camera. Bakelite molds only work for so long before they have to be replaced. As they wear out, they’ll impart different patterns and “mistakes” to the body parts that they produce. If you compare a few Lubitel 2’s from different years, you’ll often see a marked difference in the texture. Lubitel 2’s were produced with both Latin and Cyrillic nameplates – and were produced for a variety of export markets and foreign partners. One notable variant (pictured here) is the Kalimar TLR100 – which is simply a re-branded Lubi 2.

Starting in ’76, the Lubitel was cast in modern-day plastic, rather than Bakelite. The original 166 is a somewhat rare model – as it’s production number (70,000) is far beneath the mammoth quantities commanded by the other models. It featured a few significant improvements over the Lubitel 2, namely a film counter (rather than a red window) and a coupled advance and shutter cock. One of the most collectible variants was made in 1980 to commemorate the Moscow Olympic Games.

This model took the innovative Lubitel 166 and simplified it. Gone is the film counter and coupled shutter & advance. In exchange, you get a set of handy weather symbols to guide your exposure settings.

It’s with this beauty that the folks at LOMO in St. Petersburg closed the book on classic Lubitel production. This camera is essentially identical to the 166B, but includes a mask for two film formats - 6x6cm and 6x4.5cm. It was actively manufactured until 1993.

This three-eyed beauty is often mistaken for a pair of Lubitel 2’s which have been joined at the hip. Although they share a lot of the same basic mechanics, the Sputnik is definitely a separate beastie of its own.

But given its similarity, we decided to feature it here as a "family friend." Fashioned in Bakelite, the Sputnik was created at the LOMO St. Petersburg factory and featured twin 75/4.5 lenses, speeds from 1/10-1/250, and a ground glass waist-level viewfinder. Each click of the shutter fires two nearly identical images – with 'nearly' being the operative word. Both shots have a slightly different perspective – allowing you to get the full 3D effect when you view them with the included – and very special – stereo viewing glasses. 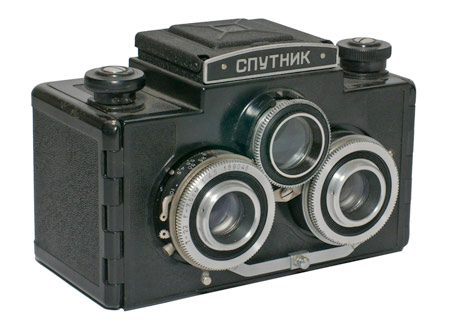